Civil Council of Popular and Indigenous Organizations of Honduras

Indigenous Hondurans: “The U.S. government, by recognizing the electoral farce, demonstrates once again their participation in the coup d’etat”

The Civil Council of Popular and Indigenous 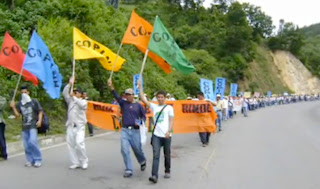 Organizations of Honduras in response to the latest events characterized by the electoral farce set up by the de facto regime, makes known the following:

1. We once again denounce that the de facto regime has deepened the repression against the Honduran people in order to guarantee a spurious electoral process that isn’t recognized by most of the national and international community.

2.- We demand the immediate freedom of the sisters and brothers who have been captured by the coup regime.

4.- We announce the great defeat of the electoral farce with the rejection of the population that has decided to abstain from voting, which will demonstrate once again the capacity and strength of the resistance against the coup d’etat. The results will be that the great majority will abstain from the electoral fraud.

5. We warn that from this farce will emerge a regime to administrate a political, economic and social crisis that will be unable to sustain itself in the face of the just demands of the people organized in the National Front of Popular Resistance. 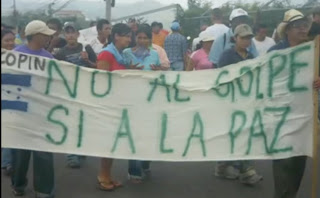 This regime will be isolated internationally from the democratic countries and peoples of the world.

6.- We condemn the government of the United States and its puppets who, by recognizing the electoral farce, demonstrate once again their participation in the planning, financing and execution of the coup d’etat, threatening to extend it to the rest of the peoples of the world.

7.- We salute the brave and honorable attitude of the people who have withdrawn their participation from this electoral farce.

8.- We call to the peoples of the world to deepen the solidarity with the Honduran people, and to be alert to what happens given the repressive attitude of the military dictatorship.

The emancipation of our people will not be detained. Nobody is giving up here.

With the ancestral force of Lempira, Mota, Iselaca and Etempica we raise our voices full of justice, dignity, freedom and peace.

Given in La Esperanza, Intibucá, Honduras the 27th of November, 2009